My only race at West Virginia’s Ona Speedway was with the Super Cup Stock Car Series on June 2, 2012. Driving the Boschett Timepieces #21 for J. J. Pack, we had a strong race car and finished a very respectable third in only my second series start.

I was really happy with third until I learned that the two cars ahead of me were accused of illegally soaking their tires. This would have made me the first legal car across the finish line. Head slap. Now, of course, third place seems terrible. It’s like going to the cinema to enjoy “Captain America” only to find out later that Scarlett Johansson was sitting behind you the whole time.

Nevertheless, I was pleased to drive Ona because I’d heard that The King himself, Richard Petty, had raced there in the 1960’s. So naturally, when Petty showed up at last week’s Mecum auction in Houston (which I co-host for NBCSN), I asked him if he remembered racing at “West Virginia International Speedway,” as it was then known. 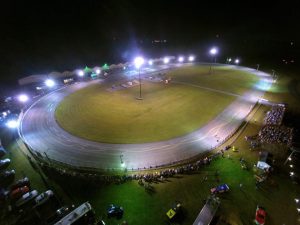 Petty laughed out loud as he continued, “It was dirt to begin with, and then the boys come in and asphalted it and when they did they just left the dirt and put the asphalt on top. We got halfway through the race and the whole track had moved, you know? They had to dig it back up and fix it. They didn’t put no gravel down or nothing, they just laid the asphalt on the same dirt.”

When I got home after the auction, I called up my old broadcasting pal, Ken Martin, who now works in NASCAR’s historical archives and asked him if he’d ever heard of such a crazy thing. Martin’s first response was, “If Petty said it, I believe it.” He then did what archivists always do… shuffle around in dusty old books and miraculously find the exact ancient document that confirms the whole story, which turned out to be entirely true.

It happened on August 18, 1963. The Mountaineer 300 is still listed in NASCAR’s records as having taken place in Huntington, West Virginia. In reality, the newly-paved facility was located in a broad valley near the village of Ona, about ten minutes west of Huntington on Highway 60. Petty remembered it as being “off on the left in some valley, in the middle of nowhere.”

An astounding 16,000 stock car fans showed up at the .375-mile bullring to see only twenty cars. Richard Petty qualified inside the second row behind pole sitter Fred Lorenzen and Jack Smith. The field also included NASCAR legends Ned Jarrett, Joe Weatherly, Buck Baker, Wendell Scott and Junior Johnson. Petty held the lead for much of the early going but eventually faded to tenth as the track began to come apart, especially in Turns 1 and 2.

“My tires were getting bald and chunks of pavement didn’t make that problem any better,” Lorenzen told a newspaper reporter after passing Weatherly on lap 198 to win the race. “I knew I had a big lead, so I slowed up the last fifty laps. I had to concentrate on missing the holes and the loose chunks of pavement.” 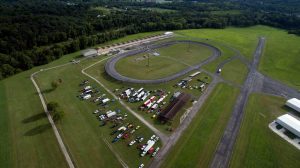 54 years later Ona Speedway is a battered old warhorse that still provides great short track racing. The track surface is tired and worn out. The adjacent airfield provides most of the property’s revenue and keeps the race track financially viable. The grandstands now hold perhaps 2,500 fans instead of the 16,000 that turned out to watch the first Mountaineer 300.

But that’s precisely why I love Ona Speedway. The track layout still covers the exact same ground. It hasn’t changed by an inch since 1963. History echoes from every corner of the track. It requires almost no imagination whatsoever to sit in the stands and hear Petty’s ’63 Plymouth roaring into Turn 1, dodging chunks of loose asphalt along the way.

Every year more of our old, historic race tracks are replaced by shopping malls, parking garages and apartment complexes. And our once-great racing is replaced with artificial green-white-checkered TV shows that three people can win.

The Mountaineer 300 of 1963 was real racing, and every October it lives on as the Mountaineer 100 for late models. Few people know of the event’s glorious past.

The first race of the 2017 campaign at Ona Speedway is scheduled for this weekend, April 15th. Put Ona on your motorsports bucket list. It’s worth the trip.

And when you get there, remember… I should have won. That’s my story and I’m sticking to it.