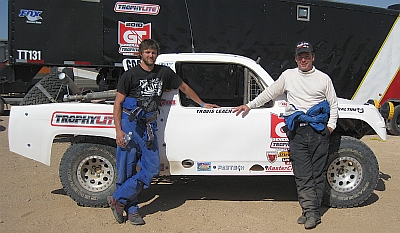 Parker, Arizona  Sopwith Motorsports finished strong after a tough weekend at the fourth round of the Best in the Desert 2010 season, the Bluewater Desert Challenge.

The race was held on a 30-mile loop through the Mojave Desert just northeast of Parker, Arizona. Each team was scheduled to complete three laps on Saturday and three more on Sunday, for a 180-mile event with the winner based on the lowest cumulative time.

The Sopwith Trophylite truck started 10th in class and quickly moved forward on the first day of racing. Driver Stephen Cox and navigator Travis Leach picked their way forward, moving from 10th position to 5th on the first lap of racing before disaster struck.

The right rear tire was cut by a rock and the truck stopped along the side of the race course for a tire change, but was unable to rejoin the race when the rear tires bogged down in silt and sand. Cox and Leach lost over an hour of valuable race time waiting for a tow truck. Once free of the silt, the Sopwith Trophylite truck was among the finishers on the first race day, although they were at the back of the pack.

The second and final race day saw the Sopwith team starting from 35th position. Clearly out of the running for the overall win, Cox and Leach decided to make up as much time as they could on the course for the best possible finish. After the final 90-mile stage, Sopwith was among the faster Trophylite trucks in the field and advanced from 35th to 27th position overall with a total race time of 4:51:05.919.

Losing more than an hour of time on the first race day ultimately cost Sopwith an outstanding 4th place finish in only its second Trophylite outing. You really can’t look at it that way, said Cox. Attrition is a big part of desert racing. I just made a mistake. I didn’t have much time to choose where we were going to stop to change the tire, and I obviously picked a bad spot. The guys that don’t make those kinds of mistakes get their top five finishes. We were fast enough, that’s for sure. But those little mistakes can really ruin your day.

The Bluewater Desert Challenge will be nationally televised by Fox Sports on Thursday, November 18th at 3:30 pm ET. Sopwith’s next race is the legendary Baja 1000 in Mexico on November 17-20, 2010.