It was Saturday morning, September 8, 2001. I’d never driven at Chemung Speedrome before, but I would compete on it that night in the Hooters ProCup Naturally Fresh Dressings 250.
I was driving for Don Satterfield, a big bear of a man with decades of experience in the sport. He had a big smile, a pleasant demeanor and a huge heart. He was definitely old school. The fire suit he wore when he drove in competition was older than I was.
Don had been in stock car racing for decades, having driven at the top of the sport in both Sprint Cup and Nationwide. But rather than stagnate, Don was always looking for opportunities to develop new drivers and build his team.
At most ProCup races I covered pit road with my incredibly talented cameraman, Richard Campbell, for SPEED TV. But Don and I had talked for a year or more about running a race together, so I put down my microphone at Chemung Speedway and jumped into his bright red #1 Chevy Monte Carlo.
I was in way over my head. I’d done really well in late models in the CARS touring series in 1999 and 2000, but those events were usually 50 laps or less. Chemung would be a 2-hour, 250-lap slog in a much heavier car at a strange track.
The competition was fierce. At the time, Hooters ProCup was the primary feeder series into NASCAR’s Nationwide ranks. Regan Smith won the pole that night. Brian Vickers sat outside Row 2. Over thirty cars had shown up for the event and I was just hoping to make the race.
But I trusted Don Satterfield. He patiently walked me through the morning practice sessions, slowly getting me up to speed and constantly encouraging his nervous driver. Every time I complained about our practice times, Don told me not to worry, everything would be fine.
He was right. We strapped on fresh rubber and qualified solidly in 16th position, more due to Don's coaching than my driving. I would have been happy with 30th. 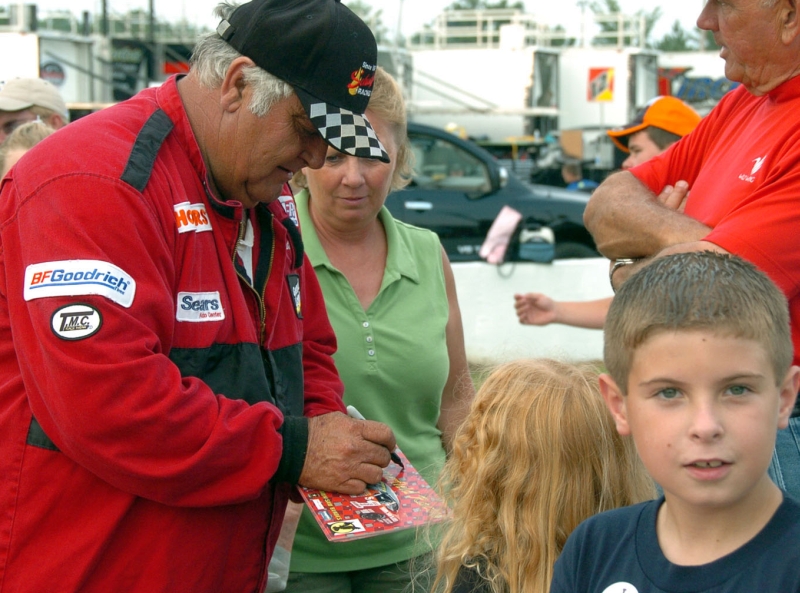 Before the race, Don told me everything I needed to know. He predicted perfectly how the car would handle at every stage of the race. He told me what to expect when the tires fell off and the fuel load lightened. We talked over the groove and our pit stop strategy.
The race began with a long run under green flag conditions, which was our worst-case scenario. Struggling through traffic and trying to find my way in a new series, I eventually lost a lap to the leaders. Sure enough, the first caution flag came out moments later but it was too late to save us. We never got back on the lead lap.
My hydration tube slipped out of my helmet and dropped behind the seat. I couldn’t find it to save my life. I hadn't been drinking enough fluids all day anyway and now I was beginning to feel sick.
But Don wouldn't give up. He kept encouraging me over the radio, telling me that we were still fast enough to finish in the top half of the field. I wasn’t so sure, but I told myself that I should believe in the man who had gotten us this far.
Another setback occurred when a lug cross-threaded during our mid-race pit stop and cost us another lap. By this time I was severely dehydrated and my strength and mental focus was fading badly.
I had to lift the visor on my helmet and let the rush of fresh air keep me alert. I took off my neck support and threw it on the floor, trying to get more air. In retrospect, at that point I probably had no business inside a racecar.
But if Don wasn't giving up, neither was I. He had put up some of his own money to get me in this race. We were on national television. The crew had worked non-stop since 7 am to put me in a good car. There was just no quit in these guys.
190 laps into the race, the radio crackled. In his raspy southern accent, Don said, “We’re the fastest car on the track right now. Hit your marks. Dig, man, dig!”
He wasn't kidding. Don had spent the day's practice setting the car up to be quick on old tires with a light fuel load, and now it was paying off. We were passing cars. Our lap times were near the leaders.
As it turned out, we finished a respectable 14th and brought home one of the few cars in the field that hadn’t been crashed beyond recognition. A better driver would have put the same car in the top ten, but all things considered, this was a pretty good night.
Don was happy. The crew was delighted. And I was violently ill and never so glad to see a checkered flag in my life.
It was all I could do to take my helmet off. I dropped the window net, got halfway out of the car and sat on top of the door, too sick to move. There was no strength left in my legs and I couldn’t lift them out of the cockpit.
As always, Don had a huge smile on his face. He gave me a big hug, told me that he was proud of me, and pulled me out of the racecar. He helped me stagger to the pit wall, plopped me down on top of it and told me not to move until the EMT’s arrived.
Don and I finally fell out of touch when I left the series after the 2005 season. But I never forgot his kindness, his contagious love of short track racing, and his ability to make a rookie driver look much better than they really were. He gave many other drivers their start in this sport. He knew how to have fun at a race track and still be serious enough to compete. If he had a dollar for every tool and part that he had loaned to other teams, he'd be a millionaire.
That is the Don Satterfield that I knew for almost ten years. I am proud to call him a friend.
If you can hear my voice crackling over the radio, Don, I'm telling you to hit your marks. Don't give up. Dig, man, dig.
Get well soon.
Stephen Cox
Sopwith Motorsports Television Productions
#20 ARCA Truck Series Boschett Timepieces/Ed & Co. Racing Supplies Chevy
Co-host, Mecum Auto Auctions
— All photos courtesy Lou Lauer/USARfans.com
Facebook Comments
« Watch ARCA Trucks, Super Cup, Anderson Speedway on TV Right Now
MUSCLE CARS: You Only Live Twice »