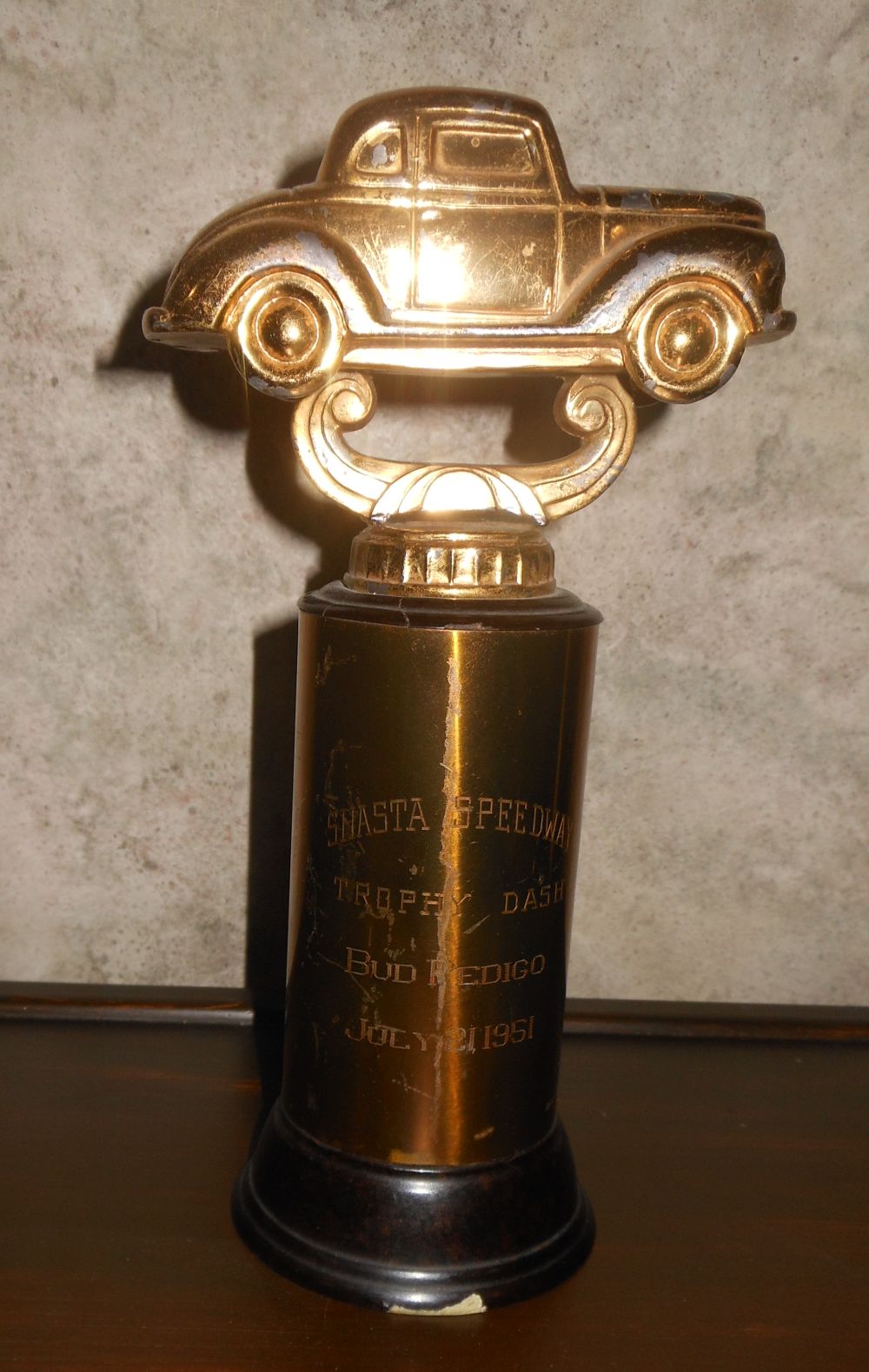 Meanwhile, Pedigo nearly killed himself in a motorcycle accident on the old Southport Road covered bridge that spanned White River on the city's south side (a modern bridge remains there yet today). He recovered, but walked with a limp for the rest of his life. Pedigo then left Indiana to chase his fortune in California.
He settled in the Redding area and was among the first to show interest in nearby Shasta Speedway, building his own car for the “Hardtop” division that is better known today as “jalopies”. His #7 1937 Ford coupe couldn't stand up under his determined and highly skilled driving. The car blew six engines and seven radiators in the 1951 season alone according to surviving newspaper articles generously supplied by Phil Corcoran and the Northern California Auto Racing Alumni Association.
Pedigo won several heat races as well as the July 21st Trophy Dash at Shasta. His prowess at the wheel quickly earned him a seat with local car owner Clyde Terry, who hired Pedigo to drive the 100-lap championship event in late October, 1951. Just weeks later, on November 18th, Pedigo won his first main event.
It took a special breed of man to drive racing machines in the early 1950's. Fatal accidents were common, even at short tracks. You worked on your own race car and fabricated your own parts. As George Follmer once told me, “we had no cool suits.”
Fast forward almost half a century to the winter of 1992. Now widowed, in her 70's and living alone, my grandmother received a phone call from her former high school crush. She married Bud Pedigo in 1993 and remained in Indianapolis for a brief time before moving to Redding with her new husband. It was during this interlude that I came to know Pedigo as my step grandfather.
We spoke often of racing. He asked continually about my driving career, and I enjoyed listening to his stories from the golden age of American auto racing. Pedigo had no use for NASCAR's over-regulated “taxi cabs,” as he called them. He loved the Indianapolis Motor Speedway and longed to see it return to its original glory.
I wish I had recorded an interview with him, but I neglected to do so and now regret it. He passed away in 1999.
I was recently digging through the bottom of my grandmother's closet and came across several amazing old trophies. Many of them came from Pedigo's second motorsports career as a successful Formula One air racing pilot. I have his winning trophy from the 1968 Formula One “Nugget Sweepstakes” air race. That's another story for another time.
But two of those trophies were a racing historian's dream. They were from the earliest days of Shasta Speedway, the days when danger was real and short track glory was hard to come by. A day when the track was still made of dirt, the cars were made of steel, and the men who drove them were made of iron.
Stephen Cox
Sopwith Motorsports Television Productions
Co-host, Mecum Auctions on NBCSN
Driver, McGunegill Engines Performance/Boschett Timepieces #21 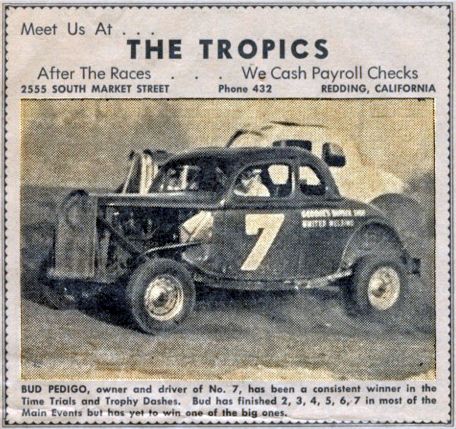 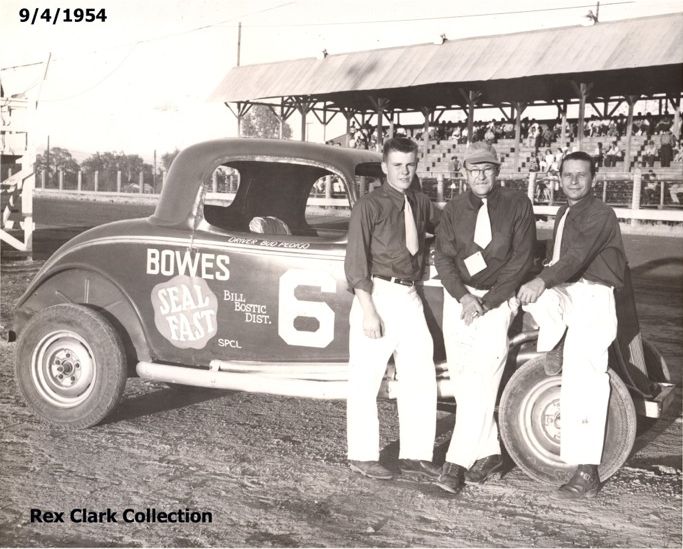 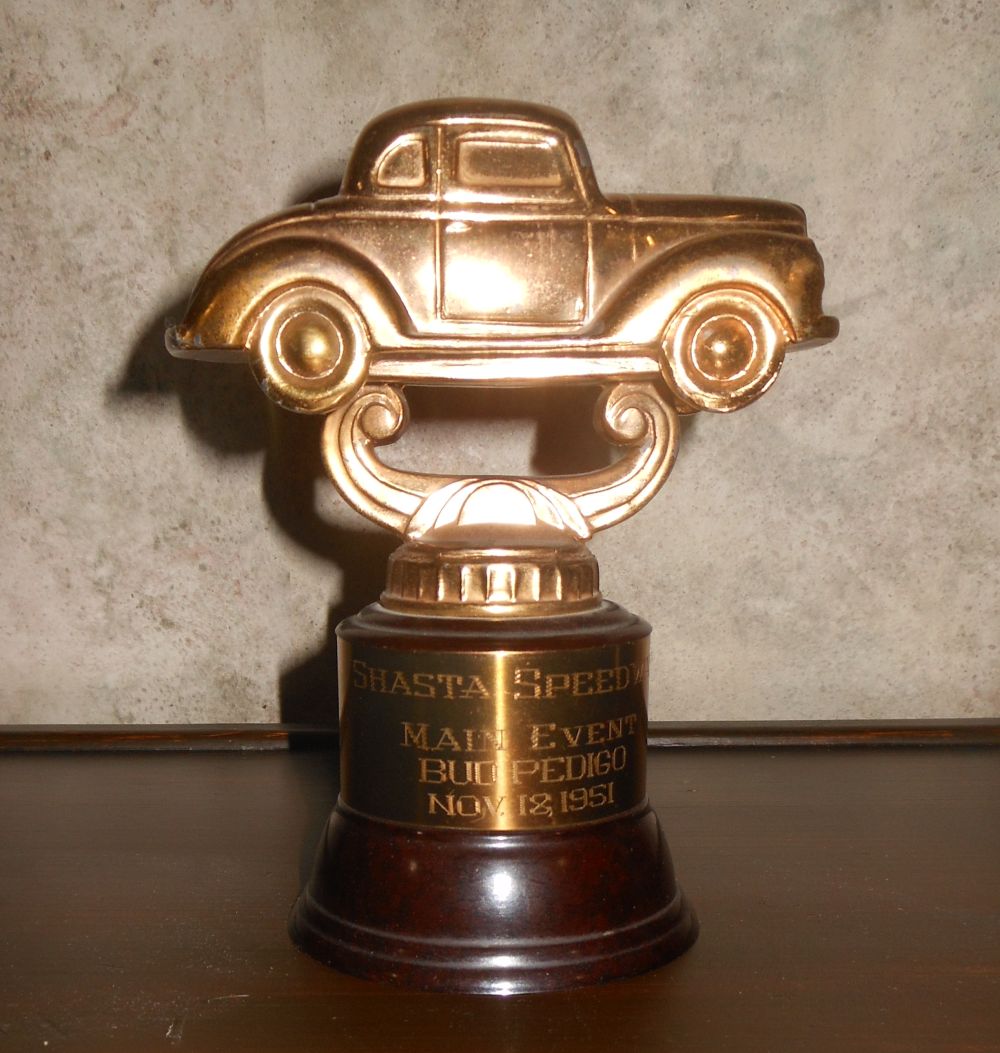