Cox and WMRacing Charge From Back of Pack to Podium Finish 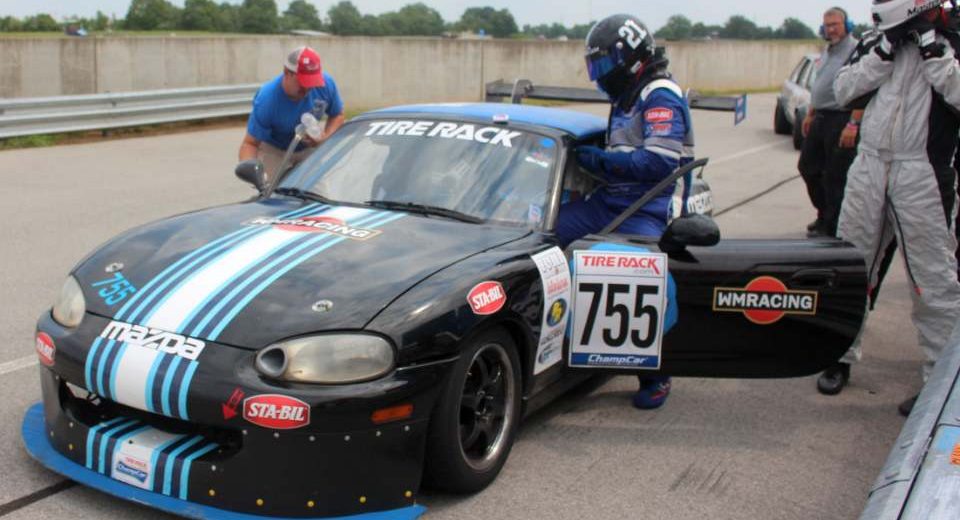 Indianapolis racing driver Stephen Cox scored the 66th podium of his career last weekend when his team came from ten laps down to finish third in the Champcar Endurance Series Class A event at NCM Motorsports Park in Kentucky.

Plagued with fuel line problems during the opening laps of Saturday’s 8-hour sports car event, the STA-BIL Fuel Stabilizer/104+ Performance/WMRacing Mazda MX-5 was the fastest car in the Class A field although it appeared to drop out of contention early in the race.

“Justin Ford laid down some great laps in the first two hours but had to make three unscheduled pit stops with minor issues,” said Cox, who drove the second stint. “Josh Castellaw, our team owner, set our quick time of the day and drove us back up to third position and Adam brought it home, but I think he had his hands full. It was not a fun car to drive at that point because of tire wear.”

Team driver Adam Lindsay manhandled the car around NCM’s 3.2-mile course at an average speed of over 75 mph despite badly blistered tires, nursing it across the finish line to secure third place.

“The new aero package on the car really makes it a joy to drive and super fast, and it’s a bit physical just because it’s so fast in the corners,” Cox continued. “It’s one of the easiest cars to heel-and-toe that I’ve ever driven. I’m thankful the team brought me on board and I’m looking forward to competing with them again.”

Cox has one race remaining on his agreement with WMRacing. The date for the next event is yet to be determined.

Stephen Cox’s next race is an oval event with the Pro-4 Modified Series in Waterford, Connecticut on July 20th followed by his return to MavTV’s Super Cup Stock Car Series in August with stops in Ohio, Pennsylvania and Virginia.