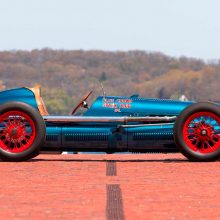 Walworth, Wis — It’s full speed ahead come this July 10-18 as the Indiana State Fairgrounds in Indianapolis opens for the annual return of Dana Mecum’s Original Spring Classic auction. The auction is a highly anticipated occurrence each May, with thousands of classic and collector car enthusiasts pouring into the Fairgrounds every year from across the United States. With this year’s necessary postponement, buyers and sellers are especially eager for the auction’s return this July, and Mecum plans to deliver in spades, having already expanded the usual 6-day auction event to a full 9 days with nearly 2,500 cars now slated Read More

The Super Cup Stock Car Series will be televised on TUFF TV in 2012 according to a new agreement with Sopwith Motorsports Television Productions.

The new preview of USAC’s Indiana Sprint Week television show has been released by Sopwith Motorsports. The full program is to be a 30-minute docu-drama with the first episodes completed this fall. Network and time slot details will be announced by USAC. Read More

Six cameras will be employed to cover the event including a primary overview camera, ground level cameras in Turns 1 and 4, a mobile camera crew working along pit road, and at least two on-board camera systems mounted on racecars.

The show will have a slightly different presentation according to executive producer Stephen Cox of Sopwith Motorsports Television Productions. Were going to relax the program a bit. Were going to talk to some drivers and teams and show off the series in the best light possible. We want our audience to get to know the stars of Super Cup, to see the cars up close and educate them on the series. Youll definitely see some great racing, but were not going to be afraid to leave the racetrack occasionally and let the viewers breathe a little.

July 5, 2011 (Indianapolis) - The 2011 USAC Indiana Sprint Week, which starts tonight at Gas City I-69 Speedway and encompasses seven races in nine nights, will receive unprecedented television exposure through an agreement reached with Sopwith Motorsports Television Productions of Indianapolis. A series of 30-minute broadcasts will be produced covering one of Americas most spectacular motorsports series, which concludes July 16 at Tri-State Speedway in Haubstadt.

We are obviously very excited about this agreement, offered USAC President/CEO Kevin Miller. We understand the tremendous property Indiana Sprint Week has become and the appeal it has with race fans across the country. It annually attracts fans and partciipants who travel many miles to become part of its rich tradition and history and we are pleased to be able to provide this additional exposure for them.

June 30, 2011 (Indianapolis, IN)  The Mecum Auto Auction visits the Iowa State Fairgrounds in Des Moines on Friday and Saturday, July 15 and 16. HD Theater will provide live coverage on Friday from 6-10pm ET, and Saturday from 2-6pm ET. Sopwith’s Stephen Cox will join Scott Hoke, Bill Stephens and John Kraman to host the show as hundreds of classic and collectible automobiles go up for auction. Read More

June 20, 2011 (Indianapolis, IN)  Sopwith Motorsports Television Productions has partnered with the Super Cup Stock Car Series to create a new multi-media platform and bring their racing events to fans through video and television. Read More

April 28, 2011 (Indianapolis, IN) - WATCH NEW ADS HERE: The new commercial previews for the Mecum Auto Auction began airing nationwide this week on HD Theater. Produced by Sopwith Motorsports Television Productions in cooperation with the Mecum television crew, the previews offer a close look at many of the historic collector cars to be sold at the upcoming Mecum Original Spring Classic at the Indiana State Fairgrounds, May 17-21, 2011.